Gas and oil tanks, wind turbines, pipelines and marine vessels are examples of the structures which are the target for the application of the ferromagnetic pipe climbing robot. Such structures are usually built from ferromagnetic material having a convex circumference and thus, utilization of magnetic adherence systems is a natural choice. Pole climbing robots received increasing attention during the previous years due to their application in the inspection of pipelines and similar structures. In order to hold itself to a smooth surface, the climbing robot can use suction cups, gripping mechanism and magnetic adhesive. In this project, we are using a magnetic adhesive type.

The ferromagnetic pipe climbing robot being designed for this project uses magnets to keep itself attached to the pipe while the motors and wheels system help to move the robot in the vertical or horizontal direction. DC motors are used as they provide 360 Degree of rotation for the wheels. The entire design and fabrication have been done while keeping in mind that the weight of the robot needs to be as low as possible.

Giving Magnetic Adhesion properties to the robot can be achieved by Permanent Magnets as well as Electro Magnet. Using an Electro Magnet was not an option due to its huge power consumption which would lead to heavier batteries and end up making the Bot so heavy that it would not be able to stick to Iron Surface. 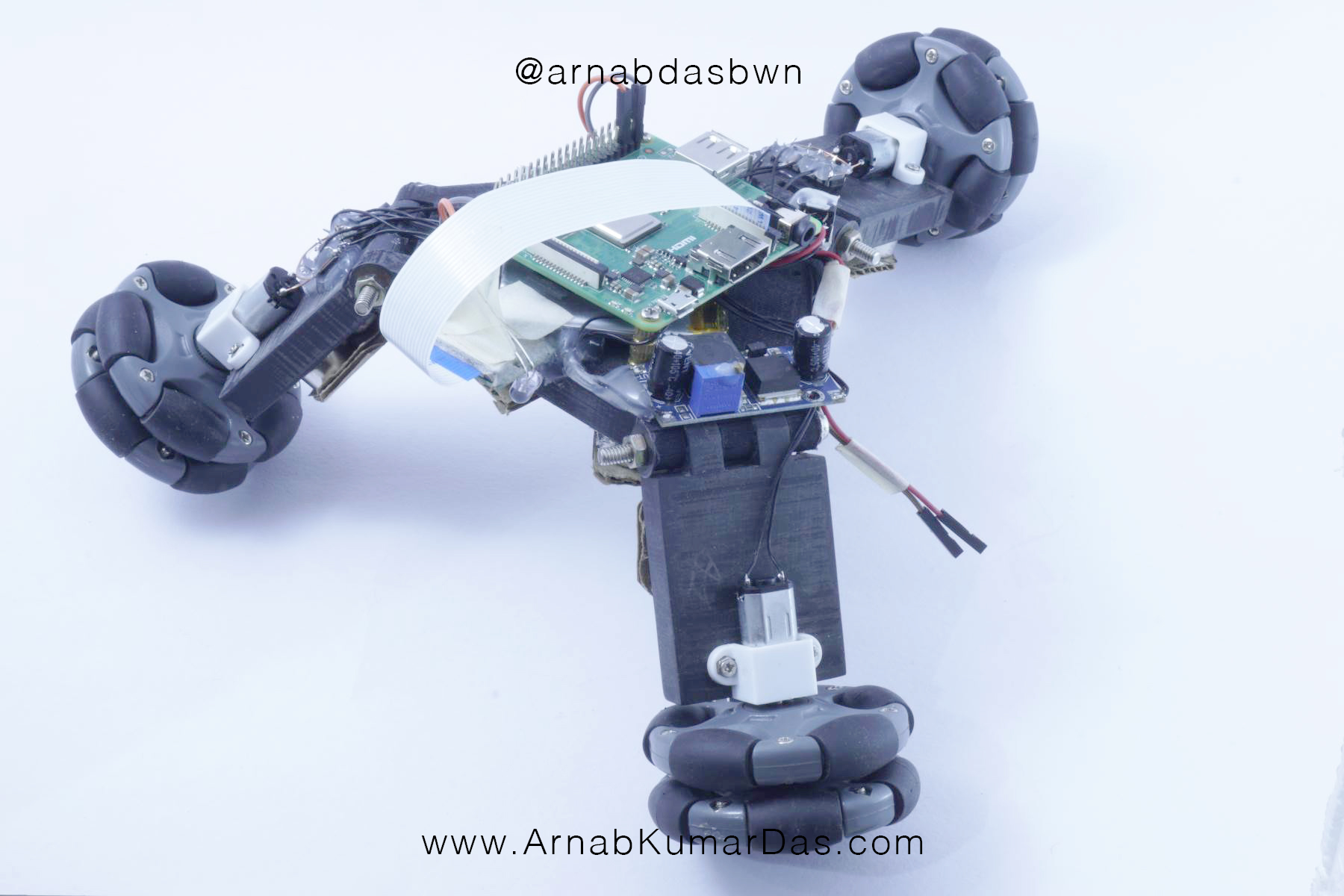 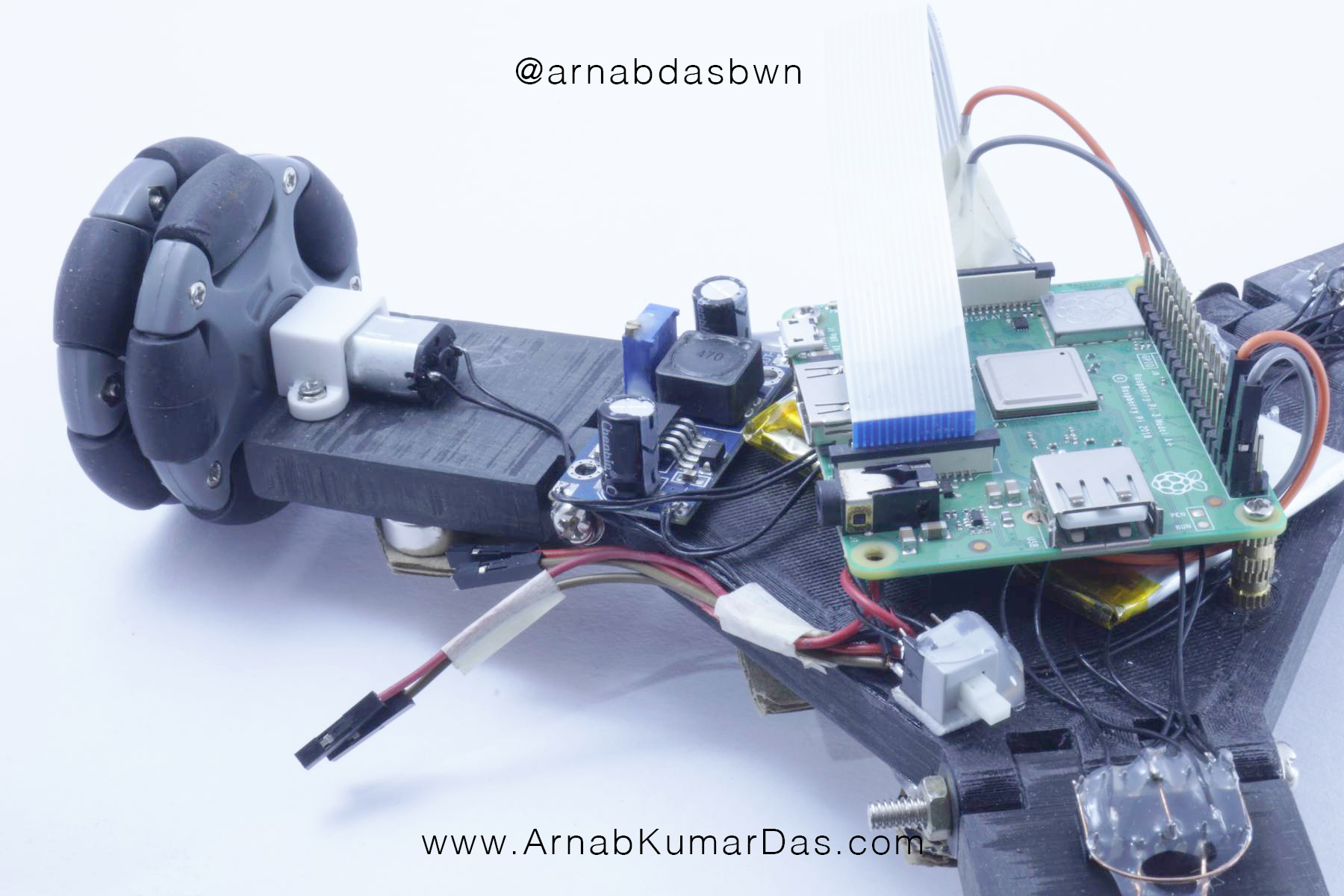 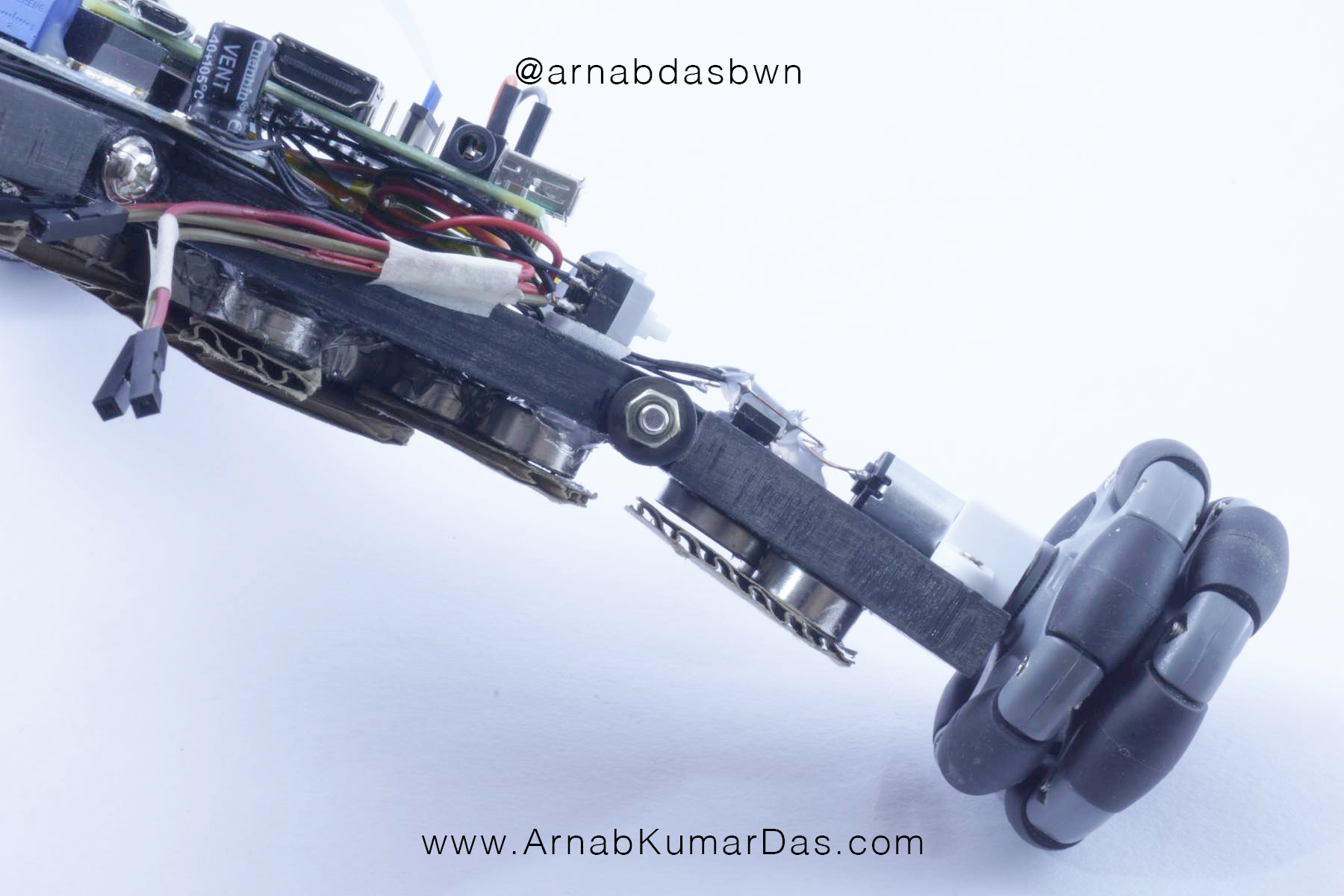 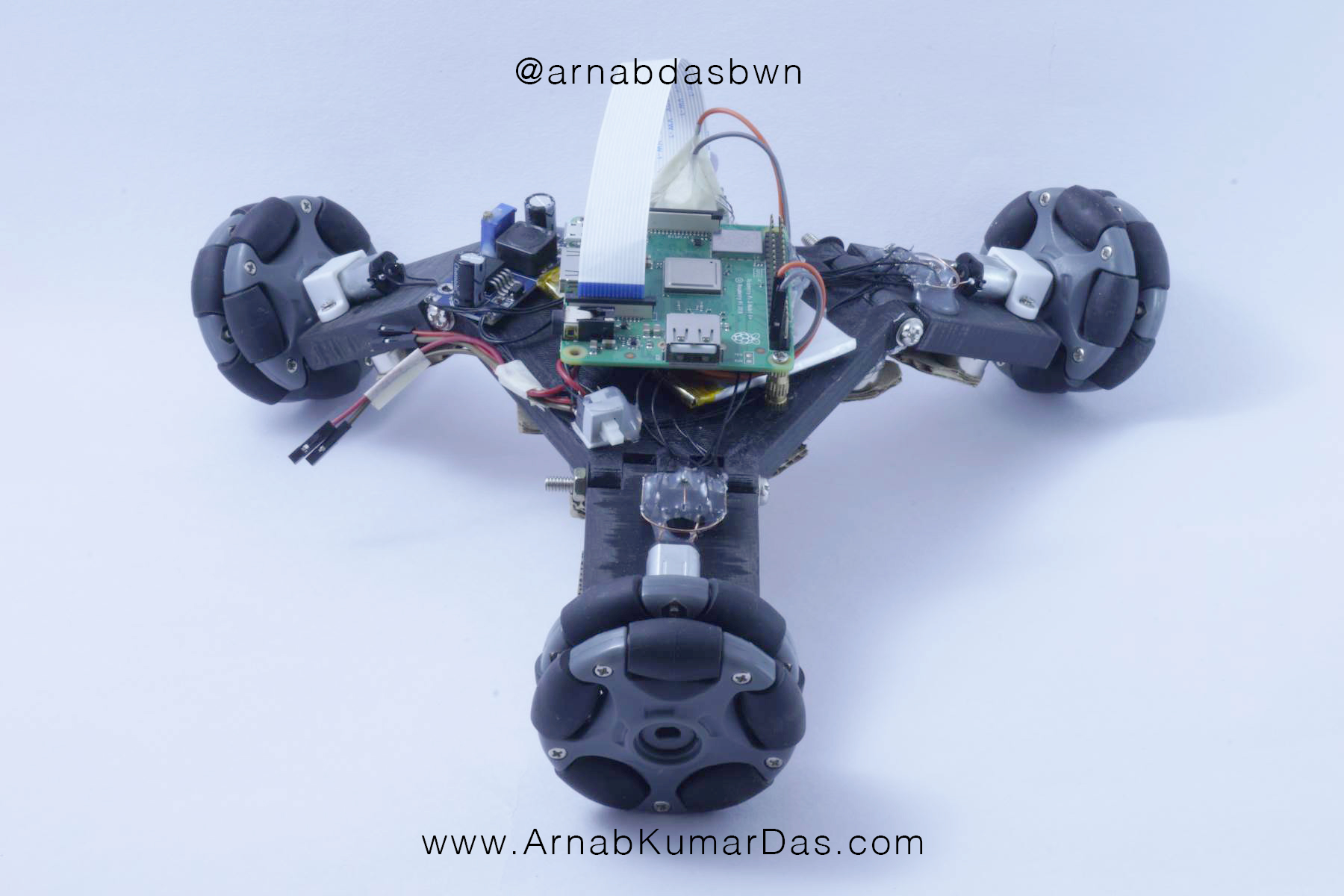 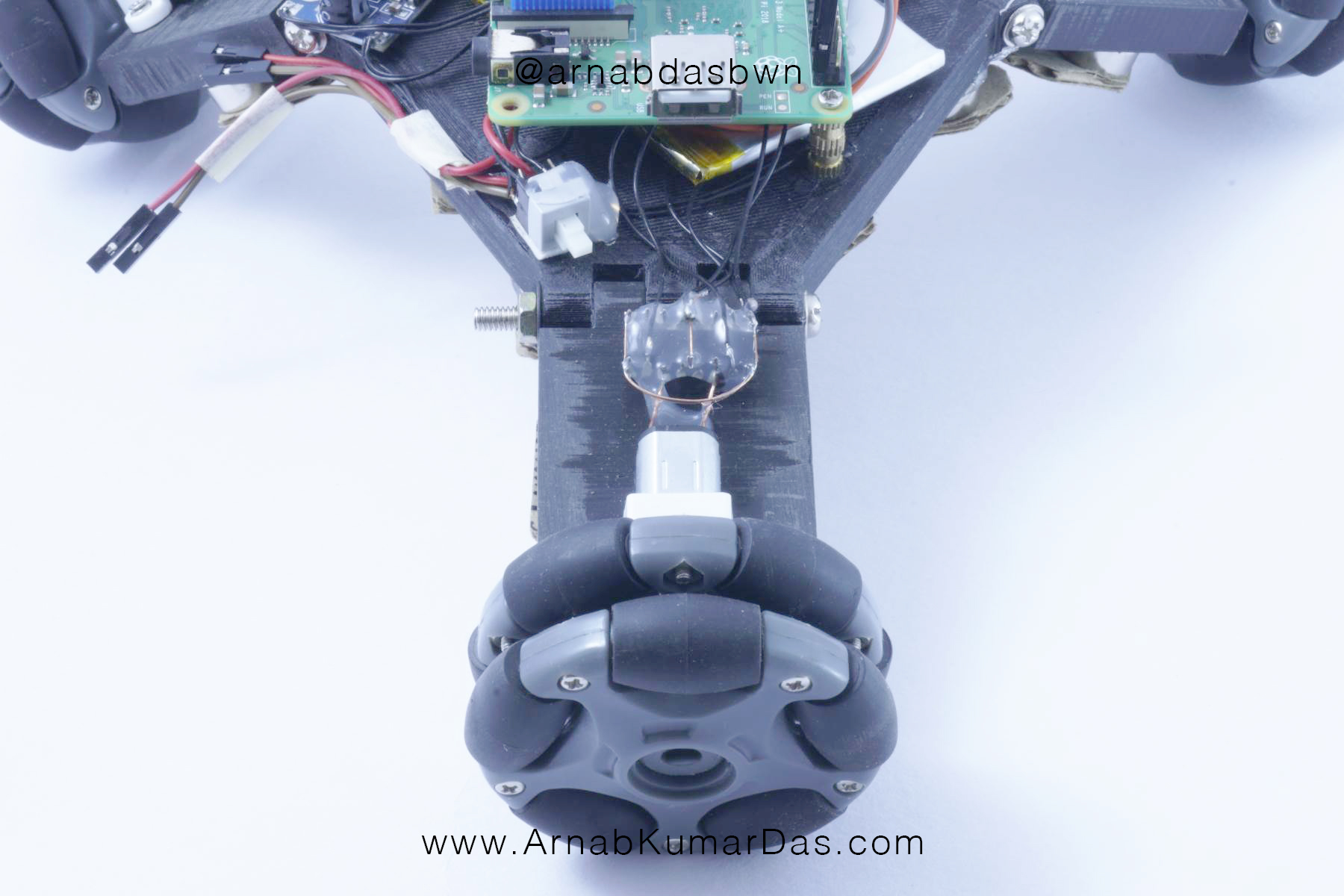 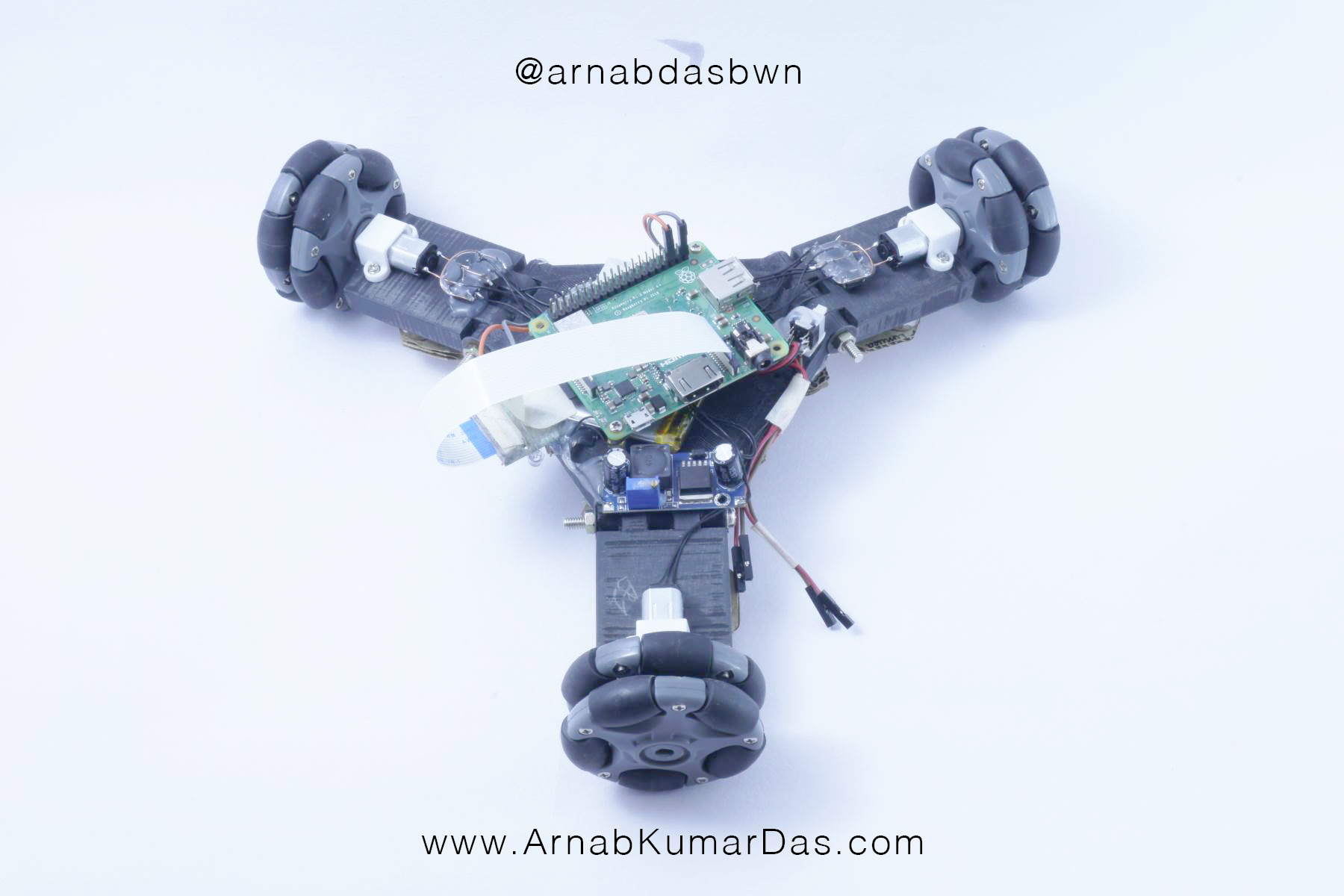 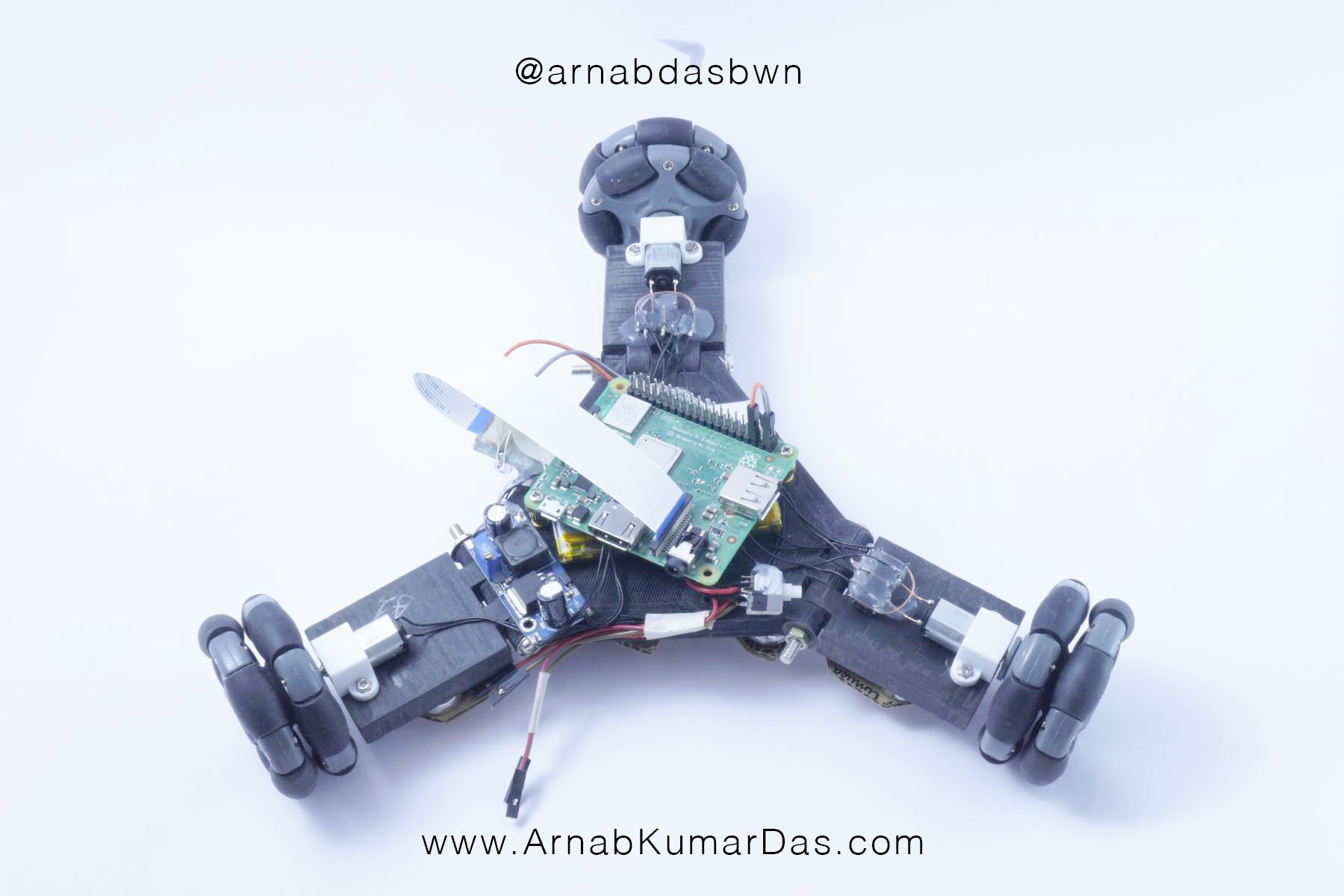 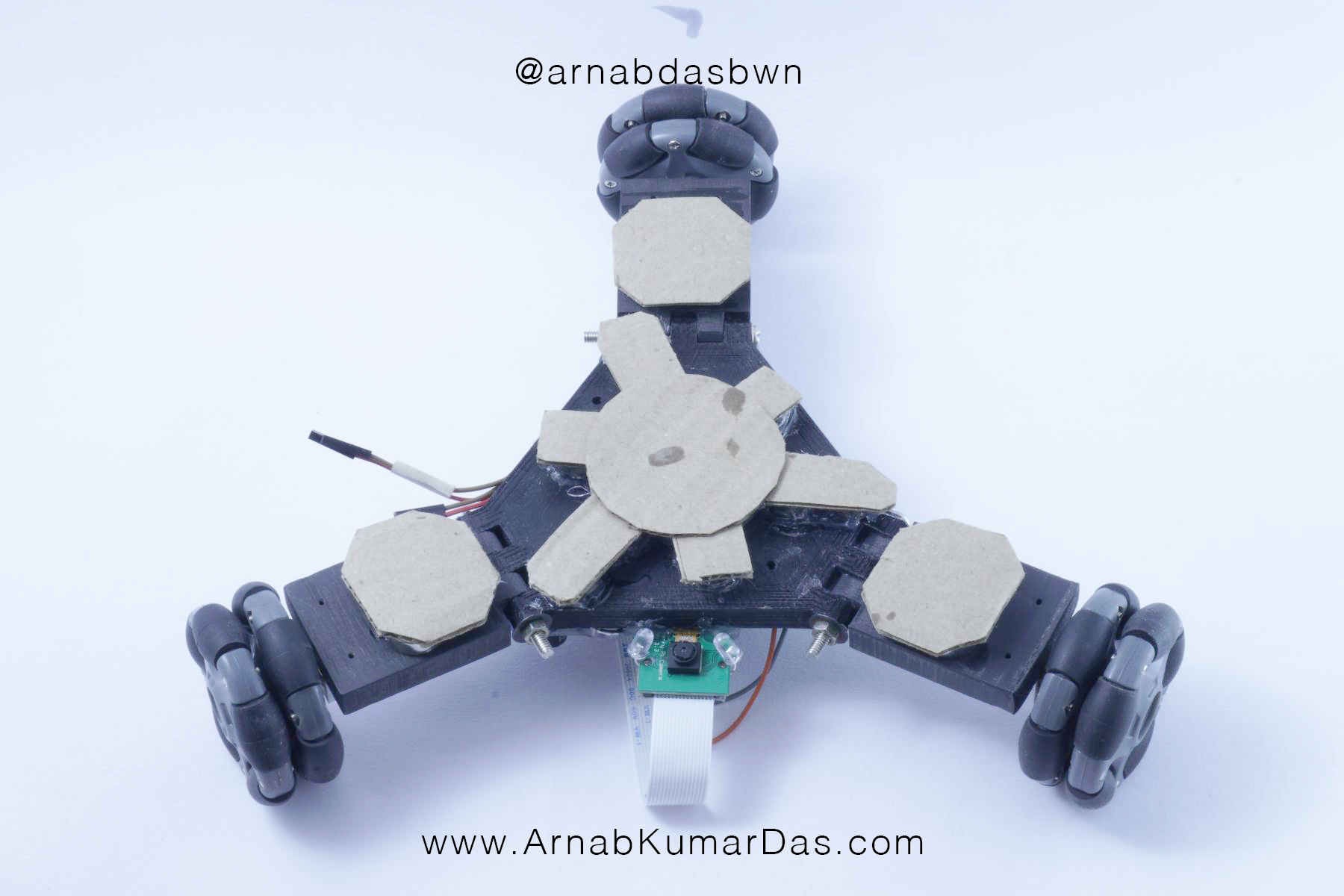 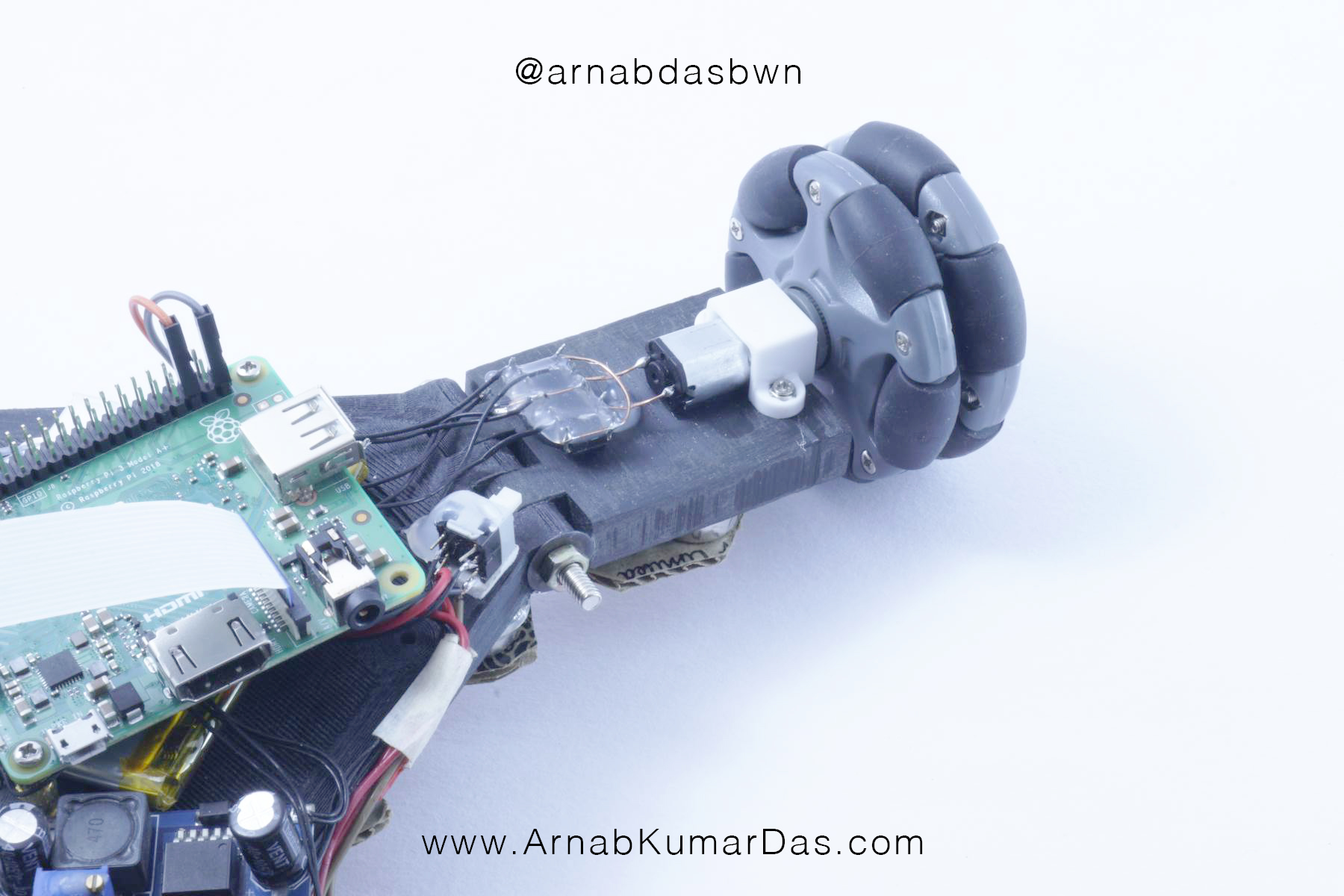 Neodymium Iron Boron (NdFeB) magnet is a permanent magnet composed of rare earth magnetic material and has a high coercive force. Their field strength has been measured at 12.5 kilogauss or 1.25 Tesla. They can usually be manufactured to be small and compact in size. However, NdFeB magnets have low mechanical strength, tend to be brittle, and low corrosion-resistance if left uncoated. If treated with gold, iron, or nickel plating, they can be used in many applications. They are very strong magnets and are difficult to demagnetize.

Neodymium magnets are graded by the maximum strength they can be magnetized to (higher the number, stronger the magnet is. The grades start from N27 to N52. As the grade of the magnet increases the magnet becomes more brittle.

We are specifically using N35 magnets because they have the average pulling force of 65.73 lbs and they can withstand the forces which the climbing robot experiences. N35 magnets are comparatively less brittle in nature thus if the robot falls down the chances of magnets breakage is less.

Omni-directional wheels are unique as they are able to roll freely in two directions. It can either roll like a normal wheel or roll laterally using the wheels along its circumference. Omni-direction wheels allow a robot to convert from a non-holonomic to a holonomic robot. A non-holonomic robot that uses normal wheels has only 2 out of 3 controllable degrees of freedom which are moving forward, backwards and rotation. Not being able to move sideways makes a robot slower and less efficient in reaching its given goal. The holonomic omnidirectional wheels are able to overcome this problem as it is highly manoeuvrable. Unlike a normal non-holonomic robot, the holonomic omnidirectional robot can move in an arbitrary direction continuously without changing the direction of the wheels. It can move back and forth, sideways and rotates at the same position.

Click on Each Product Below and You will be Taken to the Product Page that I trust and have used in my Project. I Highly Recommend You Buy Directly from the Link Below or Add to Cart.

The CAD Design is simple and straight forward optimised for 3D Printing. It has three folding arms that are adjustable depending on the diameter of the pipe it is climbing. Using a Nut and Bolt through the Axel of Rotation is used to lock the angle of each individual arm. The Raspberry Pi A+ is placed in between the hexagonal central body. The battery pack is placed between the Raspberry Pi A+ and the central body. Each arm has mounting brackets for the motors. The Motor Drivers are also placed on each arm.

You can Download the Project Files at the end of the blog.

The fabrication has been done using 3D printing. The material is ABS (Acrylonitrile Butadiene Styrene) plastic.

3D Printer infill patterns, or the internal structure of an object, are a necessary part of printing some 3D objects, especially those that require a measure of strength or sturdiness. In order for the print job to succeed, it is likely to have used a solid shell with at least a modicum of infill. However, the more infill used, the higher the cost and the print time of the object becomes.

Infill is simply a repetitive structure used to take up space inside an otherwise empty 3D print. For the majority of prints, infill is hidden from view. Infill has other purposes. In addition to filling the empty space in a print, infill can also change its weight, depending on the material used. Furthermore, infill allows printers to print flat horizontal edges over empty space reliably and efficiently. Without it, prints wouldn’t have much structure or stability, making them incredibly fragile.

The DC motors used are of 60RPM, 6V and 0.294 Nm. But I initially started with 100RPM 6V Micro-Motor which worked great in horizontal surfaces but in the vertical surface, it could not support the weight of the Bot. I later choose to use BO DC Motor which is 60RPM and much higher torque than the micromotors. But this leads to an increase in system weight which in turn lead to add more magnets to increase the cohesive force between the bot and the iron surface.

The motor driver used for the pipe climbing robot is L293D. It is a typical Motor driver or Motor Driver IC which allows DC motor to drive on either direction. L293D is a 16-pin IC which can control a set of two DC motors simultaneously in any direction.

I also used Freeform circuit deign to skip the PCB to reduce some weight of the robot.

The Raspberry Pi Camera Board plugs directly into the CSI connector on the Raspberry Pi. The module attaches to Raspberry Pi, by way of a 15 Pin Ribbon Cable, to the dedicated 15-pin MIPI (Mobile Industry Processor Interface) Camera Serial Interface (CSI), which was designed especially for interfacing to cameras. The CSI bus is capable of extremely high data rates. The board itself is tiny, at around 25mm x 20mm x 9mm, and weighs just over 3g, making it perfect for mobile or other applications where size and weight are important. It is fully Compatible with Both the Model A and Model B Raspberry Pi

Two Kinds of Wheels are used in Combination. The Omnidirectional wheel is used for steering and as a freewheel as it is having rotatable elements on the rim and it was non-magnetic, whereas the BO Motor wheels were filled with magnets.

The Bottom Surface of the Pipe Climbing Robot is used for distributing the Permanent Magnets to generate the cohesive force to stick to the iron pipe. Different size and shape of magnets were used.

Below are the softwares packages and technology used for this project.

Along with the above technologies the Raspberry Pi was configured to start a script after boot that creates a WI-Fi Hotspot and starts the Apache Server and Hosts the Webpage.

The User of the Pipe Climbing Robot connects to the Wi-Fi and opens a local page 192.168.0.2:300 on the browser. The Good Thing about this is multiple people can connect to the same device and have concurrent access. The User has to drag and pinch on the screen to move the bot around.

The Project is Based on https://hackaday.io/project/25092-zerobot-raspberry-pi-zero-fpv-robot , I have added the 3 Omni-Wheel part of the code into this.

Thanks to Max K

While testing the robot it was realised that the robot could move on the horizontal side when kept upside down using the current mechanism and arrangement. The following problems were faced when it was made to climb vertical surfaces:

Robots have been extensively used in various industries in the recent times. They help increases efficiency and reduce the risks that humans would have to face in certain work environments.

The ferromagnetic pipe climbing can be used with a similar thought in mind. It can climb pipes, avoid installing scaffolds and reduce the risks on human lives. The robot can climb vertical pipes and help in the detection of surface defects. The following conclusions can be drawn:

The current project has certain limitations which can be improved to broaden its applications. A few of the improvements could be:

You can Download the Code and other project Files. Please Don’t Forget to Leave a Comment Below.

Thank You for Reading  You are  👌

You selling this? If so hit me up 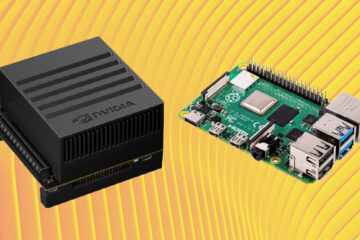 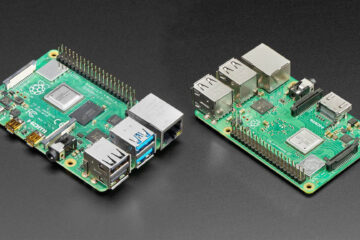 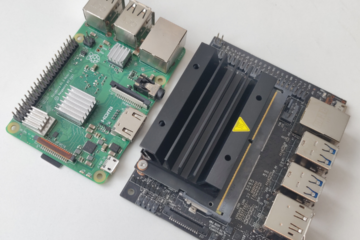