This project is focused on designing our own Arduino UNO like Development Board that can be used for our learning and other projects. This project / Dev Board is compatible with both Arduino IDE and also the Professional Atmel Studio. The focus of the project is to use cheap and readily available components that works as good as Arduino UNO.

For this project, it is good to have basic knowledge of PCB designing and soldering components. This is not a very difficult project to do. A basic understanding of electronics is also benefitial to identify components and correctly assemble them.

Below is the list of materials that I have used for the project. It is highly encouraged to buy them directly from the link below or add them to cart.

USBasp is a USB in-circuit programmer for Atmel AVR controllers. It simply consists of an ATmega88 or an ATmega8 and a couple of passive components. The programmer uses a firmware-only USB driver, no special USB controller is used. USBasp is one of the cheapest and best programmer to use for programming 8-bit AVR devices. This will also save 512bytes of flash memory that Arduino Bootloader uses.

EAGLE is an electronic design automation (EDA) application with schematic capture, printed circuit board (PCB) layout, auto-router and computer-aided manufacturing (CAM) features. EAGLE and is developed by CadSoft Computer GmbH later in 2016 it was acquired by Autodesk Inc.

KiCad (pronounced “Key-CAD”) is a free software suite for electronic design automation (EDA). It facilitates the design of schematics for electronic circuits and their conversion to PCB designs. It features an integrated environment for schematic capture and PCB layout design and also has tools within the package to create a bill of materials, artwork, Gerber files, and 3D views of the PCB and its components.

Atmel Studio 7 is the integrated development platform (IDP) for developing and debugging all AVR® microcontroller applications. The Atmel Studio 7 IDP easy-to-use environment to write, build and debug embedded applications written in C/C++ or assembly code. It also connects and support Arduino, USBasp and many other programmer and debugger. Moreover, this is the official development platform from Atmel / Microchip and is used by professionals, so we will be using this IDP.

The below schematic is simple and doesn’t involve any complex circuitry. First the schematic is designed in Eagle CAD and later was imported into KiCad. Both the files are available for download at the end of the page.

Similar steps are followed for the PCB layout as it is followed for schematic capture. Eagle CAD was used initially and later the file is imported into KiCad. A 3D view / render of the PCB is also available in KiCad.

This particular project brings out learning about PCB design, component choices, cost of product planning and many more. Best thing about this project is it encourages DIY and Maker culture which is an amazing thing by itself. I encourage everyone to do this project and make your own Arduino / Development Boards for their projects.

I have mentioned this project as v1.0 as there are so many things to improve in this project. Things like improving the form factor to support Arduino Shields, USB support, SMD design etc.

Thanks for reading this project, I highly appreciate your time and effort. 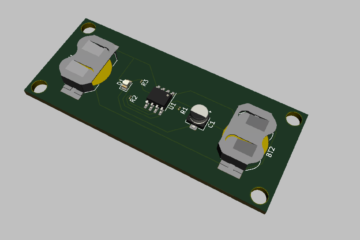 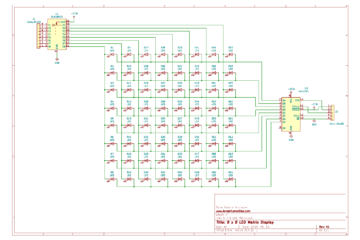 Make Your Own 8 x 8 LED Matrix Display for Arduino and other Projects using KiCad. An Open Source Project to Promote Making and Engineering. 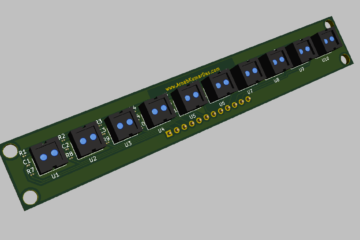